Profile Tours Contact
Paolo Antonacci opened his gallery in via del Babuino 141/a, Rome in 1998. Coming from a long line of Roman antique dealers, he had worked for over twenty years in the prestigious Rome and London galleries belonging to his father Giuseppe, a very well-known international antiquarian. Right from the start Paolo’s new gallery distinguished itself for the expertise and attention devoted to paintings from the period between the late Eighteenth century to the first half of the Twentieth century, with a particular regard for the Vedutismo. Since its first publication in 1998 of a catalogue devoted to landscape views of the Grand Tour, the gallery has annually published a volume devoted, each time, to a different aspect of the subject. Among these we recall here the catalogues about the Roman Carnival and the Golden Age of Danish Artists in Rome in the Nineteenth Century. The latter publication led the Municipality of Rome to charge Paolo Antonacci with curating the exhibition of Danish artists present in Nineteenth century Rome which was organized for the visit of Queen Margrethe of Denmark. The gallery has also opened its spaces to exhibitions by contemporary artists and, over the years, it has developed a particular interest in the less-known sector of the antique photographs of the Nineteenth century. The gallery participates in major antiques fairs such as the Biennale of Palazzo Corsini in Florence, the Biennale d’Arte at Palazzo Venezia in Rome and the International Antique Show at Palazzo della Permanente in Milan. The gallery is regularly present at prestigious international fairs such as the Masterpiece in London, the TEFAF Maastricht (painting section) and the Highlights in Munich. In 2013, Paolo Antonacci has participated at the Master Drawings Week in New York and, in the late Spring of the same year, the gallery held a major exhibition focused on the collection of Danish and Roman Nineteenth century paintings from the collection of Mr Jørgen Birkedal Hartmann. Over the years, Paolo Antonacci has forged strong relationships with many national and international collectors, scholars and museum curators. He has sold important pictures to the major Roman museums such as the Museo di Roma, the Galleria Nazionale d’Arte Moderna, the Musei Vaticani, the Museo del Corso, the American Academy of Rome, the Sovrintendenza per il Polo Museale Fiorentino in Florence and to many others significant institutions and private collections. 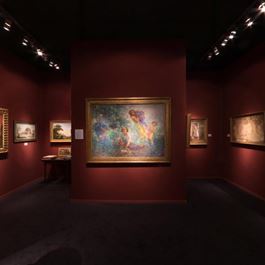