Profile Tours Contact
The Bernard Dulon Gallery has specialized in the art of ancient tribal societies for over thirty years. A member of the CNE since 1985, Bernard Dulon made his name working as a curator for exhibitions such as « Lumière Noire » (1997) in the château de Tanlay, « Objetos-Signos de Africa » with the Iber Caja foundation in Saragossa (2000), and Carnets de Voyage, in cooperation with the RMAC of Tervuren for the museum of President Jacques Chirac (2010). In 2002 the gallery inaugurated its new premises in Paris with a selection of Arman’s African art collection, and since the nit has staged a number of prestigious exhibitions such as The Art of West Africa : West Dreams (2003), statuary Art of the Lobi in the Ferrari Collection (2004), the Art of Cameroon (2006 and 2013), Kota Ancestors (2011) and Tsogho, bwiti icones in 2016. The gallery also organises exhibiitons in New york in collaboration with the Friedman Vallois Gallery and participates in many fairs in Paris, London, brussels and Maastricht. 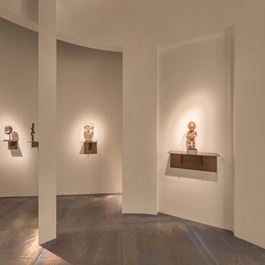